The Moray Firth is a triangular inlet (firth) of the North Sea, north and east of Inverness, and west of Fraserburgh in Aberdeenshire. It is the largest firth in Scotland, stretching for more than 800 kilometres (about 500 miles) of coastline.

Best known for its resident population of dolphins, the Moray Firth is one of the best places in Europe to see these creatures in the wild. Experts estimate that around 130 bottlenose dolphins live in the Moray Firth. Further out, harbour porpoises, white-beaked dolphins, minke whales, pilot whales and killer whales can sometimes be seen.

The coastline of this vast inlet of the North Sea provides a wealth of wildlife-watching opportunities. Rich in animal and plant life, it supports internationally important populations of wildfowl and waders. Otters can be found throughout the area, and similarly, ospreys can be seen hunting for fish while the rare oyster plant adds a dramatic splash of colour to shingle beaches, and seabirds nest in large numbers where there are cliffs. Red kites have been successfully reintroduced to the area and visitors can often spot them gliding over the farmland north of Inverness.

On the southern shore of the Moray Firth, the Culbin Forest stands on one of the largest sand dune systems in Britain. Beyond the trees lies the 7 km Culbin Bar, the best example in the UK of a massive shingle spit that's been left in its natural state. 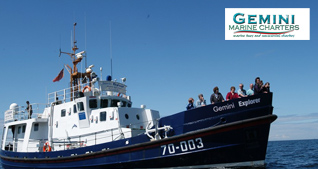 Leaving from Buckie on the beautiful Moray Firth Coast and awarded a 4 Star Tour rating from the Scottish Tourist Board, the Moray Firth Dolphins, various species of whale and a wide range sea birds are often spotted on our tours, the dolphins regularly seen showing off around the boat!